I work with Dr. Ji Wang at OSU on determining whether ammonia (a potential biosignature in the atmospheres of gas dwarfs) is detectable with the upcoming James Webb Space Telescope. With a growing list of potentially habitable planets, the search for biosignatures is the logical next step in exoplanet studies. We focus on gas dwarf planets, which we define as planets that have hydrogen-dominated atmospheres with radii larger than 1.7 Earth Radii. Gas dwarf planets are more amenable targets than Earth-like planets for transit observations because of larger radii. In addition, gas dwarf planets have larger atmosphere scale height because of the lower mean molecular weight (MMW) due to the H-dominate atmosphere, which further increases the transit signals.

Brown dwarfs straddle the mass region between gas giant planets and low-mass stars and have similar masses and atmospheric properties as gas giants. They are observationally easier to characterize, thus we can understand more about properties of gas giants by studying them. However, brown dwarf companions are rare (<5% occurence rate). Upcoming developments of larger telescopes such as the James Webb Space Telescope and the Giant Magellan Telescope will be able to probe even closer separations and discover lower mass planets to characterize their fundamental properties. 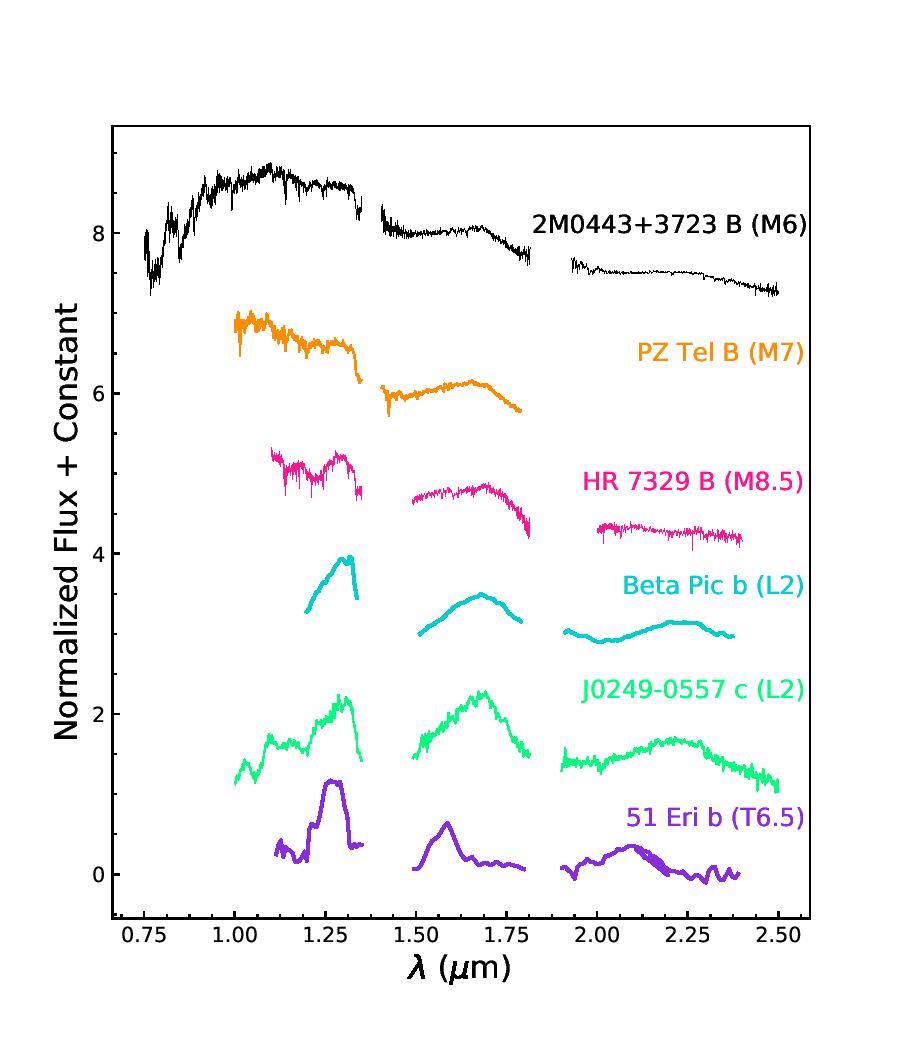 Spectral sequence of known substellar companions in the βPMG along with the candidate benchmark brown dwarf, 2M0443+3723 B. PZ Tel B and HR 7329 B have masses above the deuterium-burning limit (∼13 Jupiter Masses). 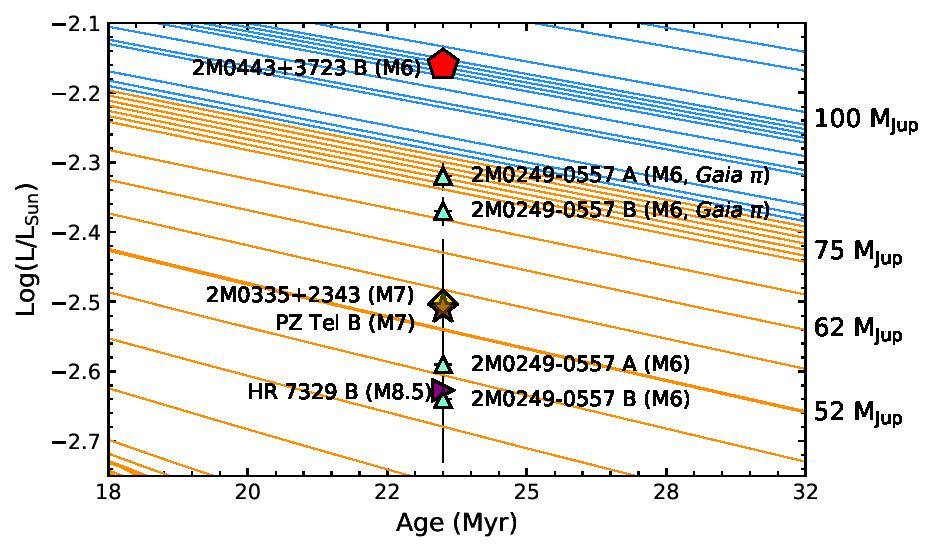 Brown dwarf companions PZ Tel B (brown star) and HR 7329 B (purple triangle) are clearly within the brown dwarf regime, while 2M0443+3723 B lies near the hydrogen- burning limit, which is surprising if it is a single member of this group because it has a similar spectral type as 2M0249- 0557 AB and PZ Tel B. 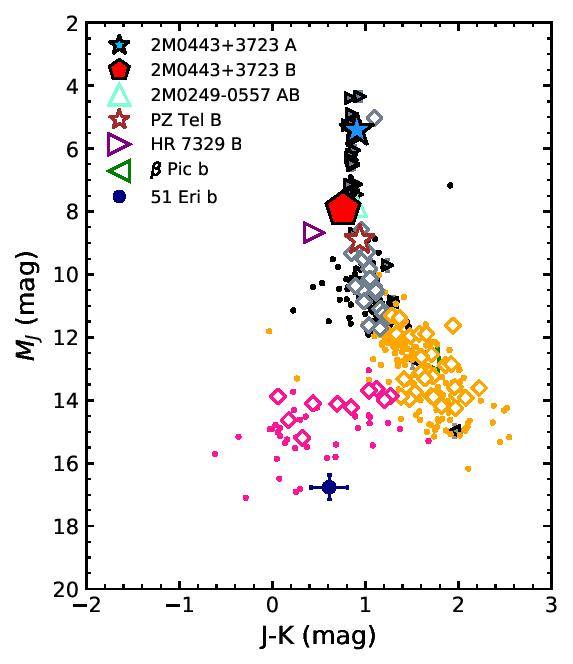 Undergraduate Research at the University of Arkansas at Little Rock

As an undergraduate, I worked with Professor Tony Hall on a research project involving the classification and identification of known meteorite samples. Meteorties provide insight into the initial conditions and elements present during the formation of the Solar System. The motivation for this project was to understand basic spectroscopic properties of stony meteorites to assist the small Physics & Astronomy department with determining the nature of unknown samples from the public. This project focused on stony meteorites; they are the most common type of meteorite, but not the most common found. This is due to weathering which can alter their appearance, which makes them resemble Earth rocks.

I compared unknown rock samples with known stony meteorties and analyzed their composition with a Raman spectrometer. A Raman Spectrometer utilizes raman spectroscopy, a type of vibrational spectroscopy that uses the vibrational energies associated with bonds in a sample to analyze the unique fingerprint that mineral structures have. I also worked with the geology department to make thin sections of samples for use with a petrographic microscope, and I also utilized Nickel tests for samples. 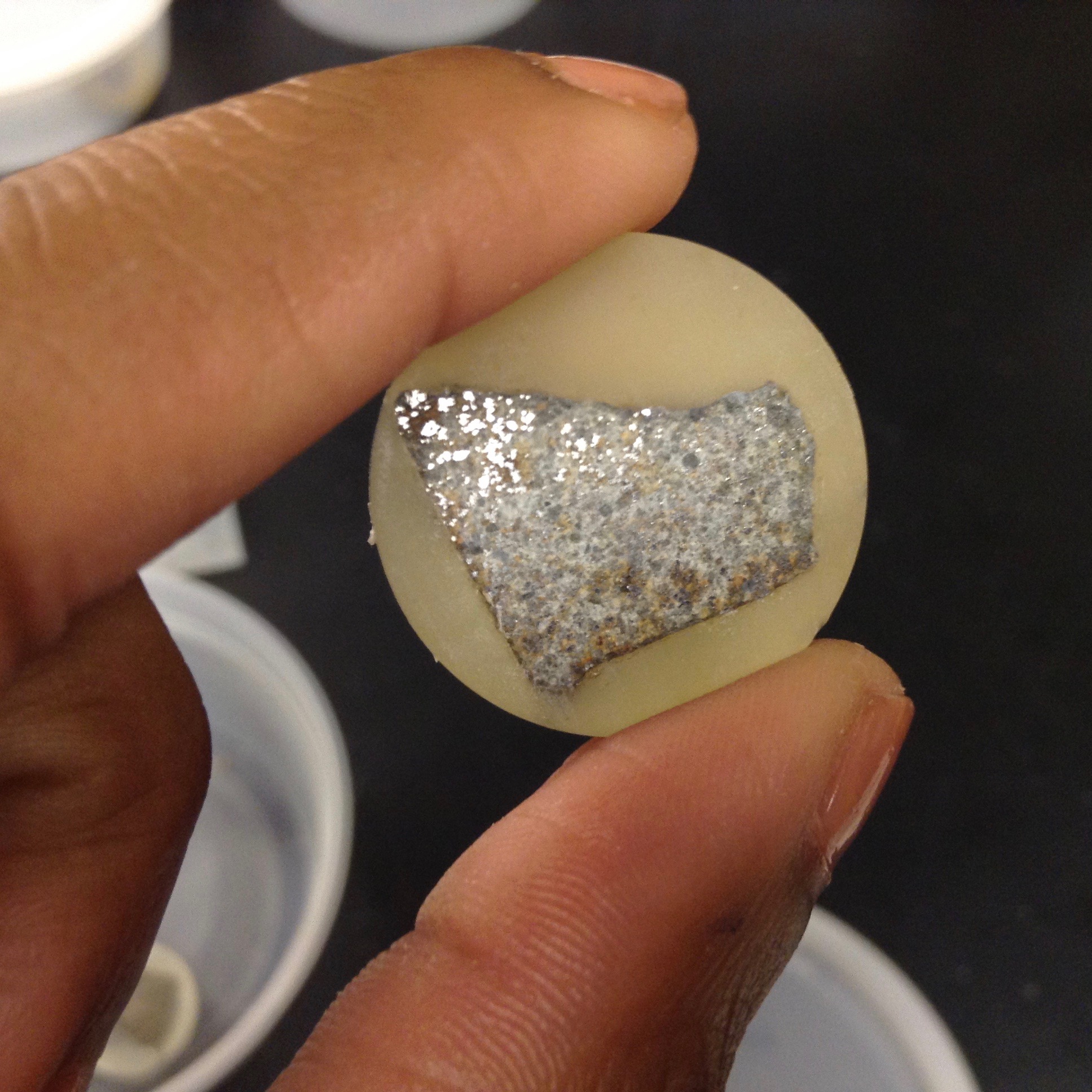 Cut section of El Hammami meteorite from diamond saw blade. The sample is mounted in a proxy solution for use under the Raman Spectrometer

Raman spectra of El Hammami meteorite matrix shows presence of mineral Olivine, along with Enstatite, and other minerals known to stony meteorites. 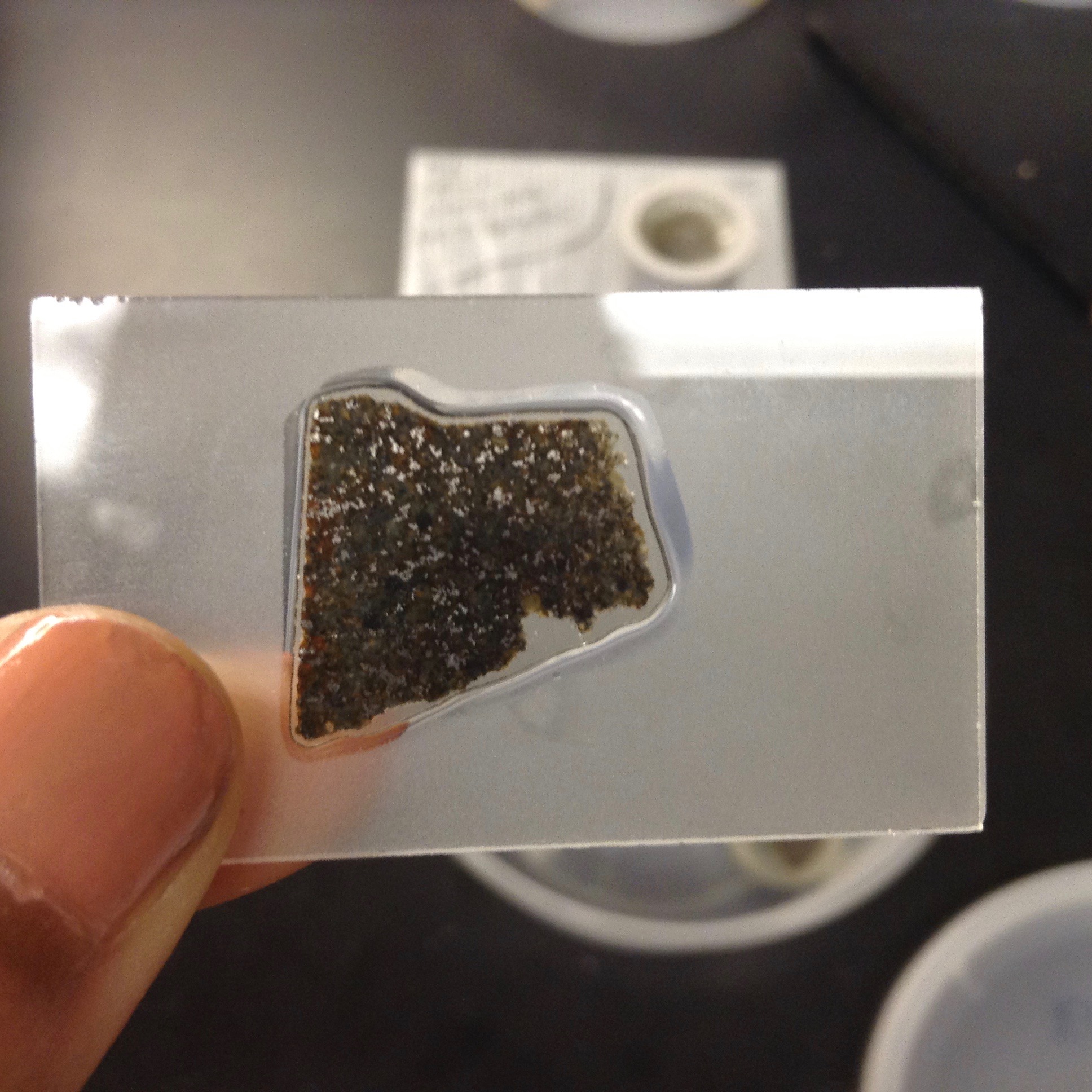 Thin section made of El Hammami meteorite for petrographic microscope